Do you long for the endorphine-fueled glow that only a song full of witty hiatuses before the verse hits its punning conclusion can bring? That unique feeling that you can only get watching a man in drag clutching the pink frills on his toga as he falls for a boyband-member lookalike in dodgy gladiator armour?
Then Achilles in Heels is the show for you.
The Londonist


Mark's one of the wittiest musical theatre writers we have and this outrageous romp in which the child Achilles is brought up as a girl to hide him from harm will make you laugh a lot. Adele Anderson from legendary cabaret troupe "Fascinating Aida" stops the show as scheming mum with a comic number that wouldn't disgrace Sondheim.
Phil Wilmott, Lastminute.com 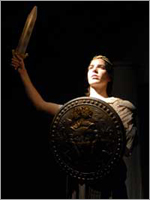 Achilles In Heels was suggested by a painting of Achilles discovered amongst the daughters of Lycomedes by Jan de Bray in the catalogue of the National Gallery of Poland in Warsaw.

The Greek myth
Id been looking for a comic Greek myth subject for some years and was knocked out by this little known, totally outrageous, ludicrous story. Apparently, according to the Roman poet Ovid, the Greek hero Achilles was hidden away by his mother, Thetis, after an oracle announced that he would die in the Trojan War. Her hiding place of choice for the boy was for him to be disguised as a girl amongst her brothers daughters on the island of Skyros.

Subsequently, King Odysseus found out the boys whereabouts and forced him to identify himself by the ruse of slipping a sword amongst a tray of frou-frou girlie things shown by a visiting pedlar (Odysseus himself in disguise). 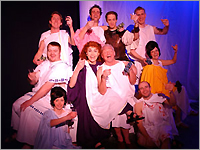 The musical version
Whilst following the skeleton of the story almost exactly, my version turns characters and their motivations completely on their heads. In the original story, Odysseus is the hero whereas in Achilles In Heels hes a warmongering braggart.

The title was suggested to me by Joanna Brookes, who often directs me in cabaret, the moment Id finished telling her the story. I immediately realised that that was exactly the title of the piece I wanted to write.

Achilles In Heels had workshops, under the musical direction of Mark Warman, with students of the Musical Theatre Course at the Royal Academy of Music in the spring of 2003. The role of Achilles was taken by Jonathan Eio who went on to play the roles of Patroclus and then Zeno the tutor when the piece was finally produced at the Landor Theatre in March 2006. Here, after a dodgy start, it went on to sell-out houses for the last ten days and so was reprised in November of the same year.

Watch Achilles in Heels on YouTube
Huge chunks of both productions of the show can be seen on MarkBunyan1, my YouTube channel. Ive chosen five favourite pieces here to whet your appetite.

It was difficult choosing between the Odysseus of Jaymz Denning, in the March production, and Paul L Martin later in the year, so Ive tossed a coin and heres Jaymz doing Odysseuss big act one number.

Finally the November cast, Sarah Applewood and Jonathan Eio as Diodeima and Zeno, Errol Clayton and Nathan Kiley as Patroclus and Achilles, all worrying that Love Is Wrong.