[It] deserves a much longer run than its present three weeks to crowded houses.
Sunday Telegraph

Subtle and moving.
Time Out

The show has everything good theatre should have...
Dont miss it.
Morning Star 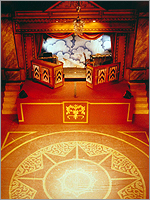 I became so fired with my idea for what eventually became Just Good Friends that I wrote the whole piece and submitted it for the competition which it won.

It opened on 2nd September 1982, directed by Ian Brown, choreographed by Karen Rabinowitz and with musical direction by Richard Sisson. 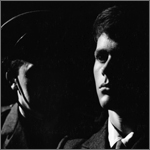 Extensive reviews
The reviews were extensive and very complimentary, from the Sunday Telegraph through to the Morning Star, and by the middle of the second week, the entire three week run was sold out.

For the last performance, a queue for returns formed at 5.30pm and (I think its safe to admit now) the 120 seat theatre was packed out with 150 people. 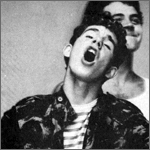 The cast
The wonderful, incredibly enthusiastic cast of 49 young people included several who would go on to careers on the stage, including John Dulieu, Lennie James, Joanna Mays, Sam Neophytou and Clifford Manley.

There are just so many good things in the show, that its difficult to know where to begin.
Whats On In London 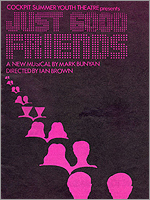 Best New Musical, 1982
At the end of the year, Jim Hiley, then critic for City Limits magazine, nominated the show for the Best New Musical of 1982 in the Plays and Players annual critics awards.

The story
Just Good Friends told the story of the friendship between a gay man, Eddy, and a straight woman, Alice, over a 50 year period, during which time they accompany one another to the theatre where what they see rarely reflects the reality of their lives. It was, as far as I can find out, the first large scale musical ever performed in London which had a gay man as its central character.

Towards the end of the piece, which is about his and Alice's relationship, Eddy has a solo in which he looks back over all the men in his life. Though there's no video of the original cast, which featured Carl Lewis as Eddy, there is a video on YouTube of me performing the song. A recording of the full cast singing the closing number, the title song, is also below.

Many of the routines are marvellously theatrical, notably a sinister set-piece on the Burgess and Maclean spy scandal, a complex 16 voice ensemble on Hollywood that Sondheim would not blush to confess to and a sophisticated cabaret-style routine on sex.
Event Magazine