After Achilles in Heels I had decided to try my hand at a piece aimed at a younger audience but couldnt find an idea that appealed. One day, walking along the Strand, I had the idea for Telling Tales. Its an extraordinary thing that you can be walking along a road and Well, at Boots next to Charing Cross Station, I started thinking about a vague idea. By a hundred yards along the road, my creative life for the next year was suddenly very enthusiastically planned out.

The story
Telling Tales is a dramatisation of five Hans Andersen stories, acted out in a show presented by five seven-year-olds, played by five adult actors. The stories are told relatively straight, though the characters of the story-tellers do break through and, of course, each has chosen a story which reflects their character.

The stories are initially to be The Tinderbox, The Emperors New Clothes, The Steadfast Tin Soldier, Thumbelina and The Little Mermaid. Character interactions however mean a change of plan and a surprising change of one of the stories. 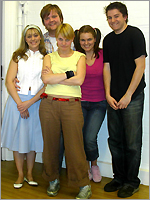 Workshop / rehearsed reading
The piece was work-shopped at the Royal Academy of Music in Spring 2004. It was then given a very successful rehearsed reading, under the auspices of Mercury Musical Developments, at the Jerwood Studios in May 2005 with the terrific cast of Pippa Duffy, Helen French, Duncan Patrick, Richard Hartley and Nicky Swift.

For both workshop and reading the superlative musical direction was by Mark Warman. The reading, with a mixed audience of both children and adults, proved that the show works well on two levels.

The Andersen stories appeal on a basic level to the younger members of the audience (as they always have); the framework appeals to the adults.

Thumbelinas song, On The Lily Pad, which opens the second half of Telling Tales, was performed by the lovely Lucy Mae Barker as part of a three-song medley of my work at the Snappy Title show at the Cochrane Theatre in September 2010.

You can see the medley, which also includes Jeremy Legat singing Pyrrhas Lament and Michael Peavoy singing Odysseus on Ithaka (both from Achilles in Heels) on YouTube.

I also used a song called A For Apple, M For Me, originally commissioned by a BBC Radio programme, as a fundamental part of the Telling Tales score. You can hear me singing this, on YouTube.

Watch A For Apple, M For Me on YouTube: