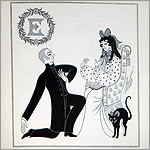 Ermyntrude and Esmeralda was my first foray into musical theatre. Its a one act adaptation for a cast of seven (4m, 3F) of a Lytton Stracheys novella.

The book was written as a private joke for the Bloomsbury Group and only published (in a very elegant edition with delicately suggestive illustrations by Erté) in the early 1970s.

The original is an epistolary novella in which the two eponymous 16-year-old girls write to one another about their discoveries about where babies come from - at a time when almost any mention of the subject is taboo. 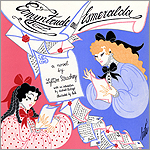 The rights were obtained from the Strachey estate and the show almost managed to emerge onto the London Fringe on several occasions between the late 1970s and mid1980s but never quite made it.

In 2002 it was given a rehearsed reading as a workshop project for that years musical theatre students at the Royal Academy of Music, through the auspices of Mercury Musical Developments.

One of the songs, Only Me, written for the lesbian character but, I hope, a genderless song, has always remained one of my favourite numbers amongst the things Ive written and I often include it in a cabaret set.