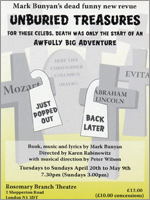 In the winter of 2008/9 I joined Mercurys Writing Lab Extreme, a series of fortnightly critique sessions.

It involved a group of writers agreeing to meet, each time bringing a song for a new project which would be given criticism, not only by the group but also by a visiting, more prominent member of Mercury. These included composers Terry Davies and Richard Thomas and musical director Mark Warman.

The Story
It was an interesting project and I chose, as my piece, a musical revue. It was based on the somewhat gruesome, but usually comic, stories of what had happened to a bunch of celebrity corpses, including those of Haydn, Mozart, John Barrymore, Eva Peron and a whole mass of others. Theres an excellent book detailing many of these stories called After The Funeral by Edwin Murphy. 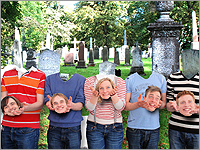 The show
My show was eventually entitled Unburied Treasures and had workshops at the Royal Academy of Music in 2009 and 2010.

A full production was mounted at the Rosemary Branch Theatre in the Spring of 2010. It was directed by Karen Rabinowitz, with musical direction by Peter Wilson.

The cast had four recent Royal Academy of Music graduates, Tom McLean, James Smoker, Jack Summers and Adam Walker, together with Jessica Sherman who had been involved with the material from its beginnings in Writing Lab Extreme.

An original cast album was produced by Mark Warman and is available from Dress Circle in London or CDBaby.com in the USA, and as a download from the iTunes store, CDBaby.com and Amazon.

Visit my Shop page for the Unburied Treasures cast album